What’s up Taos! It’s been weeks of complete isolation for many families in our community. It is crucial to do our part by staying home. Even though our movements have been limited, there’s always room to alter our daily habits.

Some of the Greens have decided to do things like pick up trash in our own yard, making masks out of recycled material, reduce carbon and water footprint (responsible water use).

Remember that Earth Day doesn’t come just one day a year. Let’s remember our neighbors, friends and family. We are sending positive vibes and appreciate you. If you have any stories, feedback or ideas and would like to share, please contact us anytime. We’d like to hear how you will be celebrating Earth Day.

I arrived in Taos after a lifetime of the poisoned air of Los Angeles and lived in Taos, rejoicing in its clear skies and clear air, for quite some time before I fully realized that water shortage is our Achilles’ heel.  Taos was not highly urbanized when I arrived; but now in 2019 it is.   One hundred years ago Los Angeles was in its own water crisis.  In 1974 Phil Lovato was expressing serious concerns about a possible water crisis developing in Taos Valley.  In the context that elected Phil Lovato as Mayor of Taos in 1980 because he was an expert on water law, discussions had begun on what is now commonly known as the “Abeyta Settlement.”   Taos Pueblo, the oldest community in the Taos Valley, has the ancient claim from “time immemorial” to all of Taos Valley’s water. The Abeyta Settlement recognizes that it is to the mutual benefit of all signatories of the Agreement to share some of the water in the Taos Valley with non-Pueblo users. In future, other competing claims to Taos Valley water will certainly arise under pressure of increased populations and impending climate disturbance.  It is also evident that water users outside of Taos Valley have wanted in the past, and will continue to want in future, to capture any available water rights to meet their own anticipated, increasing water needs.

After half a century, there are changes in water use that the Abeyta Settlement did not anticipate.  Perhaps the major area of difficulty for a current water budget arises from the fact that the Settlement was formulated prior to general awareness of the climate crises we now know we face.  Consequently, it lacks provision for meeting the challenges that disruption is certainly causing to current and future water availability.  Fortunately, though, the Settlement contains within its terms the responsibility of any one or more of its signatories to request adjustment of the hydrologic model if aspects of the model are not consistent with new information. The terms of the Settlement also provides for the drilling of deep wells to draw up aquifer waters to augment an otherwise restrictive water supply; it remains to be seen whether this option is a wise designation, because, for one thing, the quality of water from such depth is unknown.  This summer a much-anticipated conference of the parties to the Settlement, intended to be open to the public, was to be conducted in Taos by UNM’s Utton Center.  Whether the Bureau of Reclamation may also participate in this conference is currently not known.  We hope this important gathering will take place soon.

Our community is at a critical juncture in the matter of water.   How effectively town, county and tribal governments adopt and implement policies to control the use, storage, conservation and sustainability of our shared water will determine our future in Taos Valley.   Will the Town and County governments continue to follow the growth and development-friendly policies with associated high water usage, delaying a vital community-wide commencement of a sustainability model?   To further delay turning our attention to water use management risks the danger that, like some ancient civilizations, perhaps distant in time but geographically near to us, we might be forced to abandon our community in search of water.

As we contemplate this precarious moment in planetary and community life, and work toward a comprehensive water budget for our future, it is already possible to discern ways we can improve on our own, individual, self-restraining water use. For example, shorter showers, washing dishes in less water, planting less thirsty plants, not hosing down concrete and automobiles to clean them.  Addressing this water shortage, like addressing climate disruption itself, ultimately demands systemic strategies to correct some of the most destructive policies impacting local water availability over time.  Restoring the acequias and revitalizing local agriculture are such systemic tactics, and will greatly advance our continuation as a stronger, self-sustaining local region of New Mexico which does not exceed its carrying capacity.  Many more ways will emerge through discussion and consensus by which we will come together as neighbors and Taos residents to see water with new eyes and work to preserve it from waste with new habits and practices.

The Steering Committee of the GPTC endorses this statement. 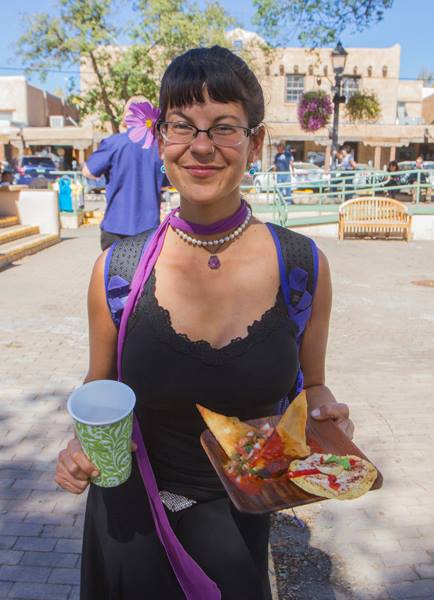 Join Creative Wellness Specialist Angie Fernandez, as she helps you discover simple solutions to reducing your environmental impact. She will cover the famous R’s – reduce, reuse and recycle, plus she will teach you a few more – rethink, refuse and reconnect. Each person’s lifestyle is unique and this event will help you think about what simple changes you can make to “live like you love the planet”!

Angie is a minimal waste practitioner, residing in Taos County, NM. where she lives off grid in a 160 square foot tiny home and empties less than one bag of garbage per year. She is an advocate for the protection of land, water and people and partners with many nonprofits to promote community, agriculture, healthy lifestyles and minimal waste events. She may be reached at healthnhappiness4life@gmail.com

A $5 donation will help to support this and future events

All life forms on this planet are currently in danger of extinction. The majority of the extinctions that have taken place thus far happened after our species took over the planet.

It is true that we are the most intelligent species that ever walked on Earth. Unfortunately, we are also the most destructive. If we don’t wake up and act quickly and collectively, our planet will be barren like Mars before the end of this century. You don’t have to take my word for it. There is plenty of scientific research that validates my statement.

There are two questions we should be asking ourselves: How did this happen and what can we do to change it?

All life forms are focused on survival, including humans. There are essentially two approaches to survival. One is competition and the other is cooperation. The paradigm that best describes competition is survival of the fittest. The paradigm that best describes cooperation is Love. Love is oneness realized. When we realize that we are “All One,” we will cooperate with one another. Cooperation ensures survival. Competition ensures extinction.

The human race has been waging war since we invented bows and arrows. In 1945, America dropped two atom bombs on two heavily populated cities in Japan. The death toll of innocent people was horrific. It ended the Second World War, but it didn’t stop wars. We are bombing innocent people of all ages to this day. Why? Because we want to control the natural resources of the planet. We are fracturing the lithosphere and poisoning three essentials of life: air water, and food.

In 1961, John F. Kennedy was elected president. I was ecstatic that he won. But, I was stunned by the outgoing president’s farewell address. Ike warned us about the “Military Industrial Complex.” He wanted to say “Military Industrial Congressional Complex,” but he was forced to remove the word “Congressional” as it would have warned us that our government had been purchased by this Complex. JFK was assassinated a couple of years later and then Vietnam burst into a bloody, prolonged war. The wars continue to this day. Controlling the world’s oil is the main reason.

This Complex owns the Federal Reserve, all major banks, big industry, the military, and Congress. I believe that this Complex is “Big Brother” from Orwell’s novel 1984. In 2016, Big Brother rigged the elections. It wasn’t the first time, but it was the most obvious.

The 45th president is a White Supremacist who believes women are play toys. From all indications, Trump is a a sociopathic liar and a puppet of Big Brother. His cabinet is composed of oil and big bank billionaires.

As of this writing, Trump signed a bill making resistance to pipelines illegal. What happened to freedom of speech? Are we currently in a a Neo-Nazi Empire? Where do we go from here?

We must build a cooperative system and take back our Democracy. We can do it in spite of Big Brother.

During the World War II era, Spain became a dictatorship under Franco. These were frightening times for Spain’s citizens. But a brave Catholic priest in Mondragon, a small town in northern Spain, formed a cooperative system at the community level. This enabled people to come together in member-owned cooperatives that controlled education, local government, and production of goods and services. They not only survived the dictatorship, they are still flourishing today.

In Mondragon they had cooperative member-owned banks.We can take our money out of big banks and transfer it to member-owned credit unions. If necessary, we can create our own monetary system.

Remember, money is an illusion. We created it because it was a more efficient means of exchange than barter.

Of course, all of this will require more research.

I will expand on these topics and more in future articles. In the meantime, we the people must cooperatively and peacefully oppose corporate tyranny now!

Joe Bigley is a member of the Green Party of Taos County.

Micah Roseberry, co founder of the Taos Country Day Waldorf School and Cerro Vista Farm, has been teaching and farming in Taos County for 30 years. Her current projects, Farmhouse Café and Bakery and the local, organic School Lunch Program combine these experiences to serve local, organic food to Taos students, create a market for area farmers, and build the local farming network to increase local food production and preserve our water rights. The School Supported Agriculture model is a way to increase our local food resilience, grow our local economy, preserve our agricultural heritage and invest in the health of our future generations. Join in a conversation of how to build on the strengths we have and expand capacity for community sustainability.

Hosted by the Green Party of Taos County